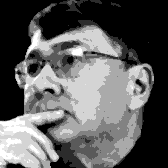 Basically my story is not an adventurous story, it’s probably an ordinary story. In 1965-66, I was a student at USC as many of you are students at USC. I had a student deferment; I was completing my third year of studies and I was in a draft board. There was an active draft during that period of time; that was certainly before the lottery. My student deferment was changed to 1A, which meant that I was available to be drafted.

I appealed the draft with the draft board and was advised that there was a shortage of draftable men in my board and that I should anticipate being drafted within 60 to 90 days. Others, friends of mine had served some were killed, others were injured. In talking with my parents it was thought that I probably should go into the Navy. My dad had served in the Navy during the Second World War so that’s what I did. I enlisted in the United Stated Navy.

Regarding the Viet Nam War; the war had been going on since 1955 or so. I was in elementary school and through my high school years it seemed like there was always a conflict going on in Viet Nam. I never related it to myself; after all I was going to college. My plans were to do pre-med, to go through college, and to hopefully become a doctor. As I indicated earlier, those plans were changed when it was decided that I was to be drafted and I enlisted in the United States Navy.

At the time there was a naval training station at San Diego. I went through the basic training there and then became a radioman. I was interested in electronics and electricity and in communications. I went through the radioman aid school, took leave with my family, and then I was assigned to a mine sweeper: The USS Pivot, MSO 463 which was part of the mine division 92. At that time there was a Long Beach Naval Station and my preference was any ship Long Beach, so that at least I could stay in the southern California area.

The purpose of the USS Pivot was not necessarily to sweep mines during the period that I served and those were cruises in 1968 and 1969. The mission of the USS Pivot was Market Time Patrol, which was basically to be off the coast of South Viet Nam, off the DMZ area, and off the Mekong delta area to intercept sound-hands and other small boats that were trying to sneak supplies and ammunition to shore. Our task was to intercept them, to stop them, and to do other tasks as well, such as mend cat boats, providing medical assistance, and to be on station for rescue operations as those were needed.

I served two tours in the Navy. Actually after my first tour, I actually volunteered for Operation Deep Freeze and I was thinking of serving at McMurdo Sound in the Antarctic, until I discovered that I was going to have to extend my enlistment.

As it was, I served a total of three years, nine months, twenty-three days, and there was a reduction in force. I was discharged, honorable discharge in April of 1971. My occupation before I went into the military was a student at USC; my occupation after I came out of the military was a student, no longer at USC, we couldn’t afford that at the time. I actually went to Cal State University Los Angeles under the GI Bill, under the Veterans’ Benefits Bill.

For students today watching television or the movies, it seemed like the Viet Nam War was a televised war, lots of video, and on the TV screen for the people who were at home certainly being able to follow everything. But for many of us who were actually involved in it, we really didn’t know in terms of the big picture.

Ship life was basically twelve hours on duty, twelve hours off duty. I served in as a radioman so I was in what was known as the radio shack, which was an enclosed, secure area, and you didn’t even see the outside for hours at a time. There were no newspapers or television to watch or radios to listen to, so quite often a lot of the activities and events that people at home were watching on TV that we were actually participating in, we didn’t really understand or realize how the wide world was looking at that, or what we were actually involved in. I mean, you could be involved in a mission off the DMZ and not even have the full picture, because it was all on a need-to-know basis.

Life at sea was dull. It was long days. The ocean is a big place, punctuated with a few, I don’t know, I guess you would call them exciting activities, but for the most part life at sea was very dull. You spend a lot of time wondering how is it that you got caught up in all of this.

The Viet Nam Conflict, or war, a lot of people interpret it differently. I think maybe there were some noble ideas in terms of why we were involved in that. It was all part of the Cold War and the containment of communism and so forth. There was a lot of idealism through President Kennedy, Lyndon Johnson of course who accelerated the conflict. President Nixon who actually was elected and in coming into office wanted to resolve the conflict, initially escalated it and then eventually was able to get a cessation of hostilities. As a matter of fact, it was under President Nixon’s term that there was a reduction of force and I was able to get out three months earlier than my normal four-year enlistment would have called for, as did a lot of others. And that was appreciated, because it looked like that conflict was coming to an end; took another two years before it was all done. Unfortunately it did not end well; ultimately, South Viet Nam fell. However, today, Viet Nam is an emerging country; it’s a country that’s taking it place in the world as a potential global trading partner. It’s ironic that the conflicts and all the casualties that occurred during then; now, Viet Nam is viewed as a business partner and as a place to go on vacation perhaps.

This entry was posted in American, US Navy and tagged Ron Wilhelm. Bookmark the permalink.

Ronald G. Wilhelm was attending the University of Southern California as a third year pre-med student when his student deferment from the draft was denied. After being informed that he would be drafted within sixty to ninety days into the US Army, Ron decided to follow in the footsteps of his father and enlist in the Navy instead. Having an interest in mechanical and electrical equipment he served as a Radioman from July 1967 to April 1971 on the USS Pivot MSO 463 of the Mine Division 92. The primary function of the USS Pivot was Market Time Patrol, serving off the coast of South Vietnam (DMZ, Mekong Delta) and intercepting sampans trying to move supplies to the coast for the Viet Cong. Ron was honorably discharged with the ranking of Radioman Petty Officer 2nd and returned to California to resume his studies, changing his major to Business. Currently holding his MBA from Cal Poly Pomona, he works as a Managing underwriter for a commercial insurance company.