From ARVN to Reeducation to America 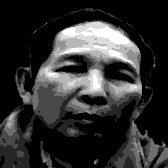 Note: Thai is accompanied by his brother-in-law, Bao Tran, in this interview, who translates and reads Thai’s responses as well as adding in his own perspective. Bao also served with the ARVN and was later prisoner in a reeducation camp.

On Hearing War was Breaking Out

[youtube=https://youtube.com/watch?v=wQievdUi_s4]
The war messed up everything. It made it broken, they killed people, I thought it was bad news. We didn’t like the war.
I think first when I heard war was breaking out in 1972, we had been in university, but in the summer of 1972, the war of Vietnam was very harming. Everybody in the school, and the big university — they closed. Everybody, they had to go to the army.
How about him? [motions to Thai] 1966 — he had to go to the army.
After that — we go to the war.
I saw lots of my friends die, because we fought together, the republic in the South fighting the North.
But in the North, they had the support from Russia and China, but the army in South Vietnam — only American support.
They had 50,000 people — American — die from Vietnam, and in 1973 the Americans left my country.
From 1975 the war was over — the end of the war after the Americans left.
Everybody worked together with the Americans before.
They [North Vietnamese] cast us to work in the prison in the mountain.
How about him? [referring to Thai] Seven years.
How about me? [referring to Bao] Five years.
Every — as much as seventeen years, fifteen years — different.
But after that, they had the contract from Vietnam and America, from President Reagan — they sponsored those who had been living in a cell for over 3 years.

On Those Fighting for North Vietnam

But now the war’s over, over 40 years ago.
We forgot everything, we want to get back together.
Not because the war is over, we want Vietnam to become the good Vietnam.
We don’t like that we haven’t gotten back together.

On The Americans in Vietnam

[youtube=https://youtube.com/watch?v=4te0zfR0tOE]I feel toward the Americans in Vietnam — they looked very friendly, they helped Vietnam fight the Communists in North Vietnam.

On Fighting for the South instead of the North

I fought for the South because I lived in South Vietnam. But in North Vietnam were the Communists — they were different. We wanted freedom.

On Fighting Other Vietnamese

How did we feel about the North… no good with me because the North was Communist. We fought all the Vietnamese together. Because from China, from the Russia, from the Americans, Vietnam follow that. We didn’t want to fight together.

On Experiences in the Army

Were you scared at first when you entered the war?
No, he [Thai] was not scared. He doesn’t care.

Oh yeah, we regret something in the war. They made broken families, they broke all of them.

On Living in the Reeducation Camp

[youtube=https://youtube.com/watch?v=cdlvbsR299I]
Oh, you know, me and him, we were living in the reeducation camp. We worked very hard, labored very hard. And we worked very hard but the food — it was just a little bit. Every day we were hungry, and the clothes and the medicine — not enough.
How was the food like in the camp?
The food? You know the rice? Not the rice, they gave you something like corn, powder and bread. That’s it.
How was it enduring the cold in the winter?
You know because we lived in, not in the village, we lived in the mountains, in the valley in the mountains; around here, there were a lot of trees, it was very cold in the winter. We drank the water, not clear water.

On Coming to America

[youtube=https://youtube.com/watch?v=yEW2ujxcCmA]
I very much liked when we came here to America because my children grew up here very good and we have freedom.

On How America has Helped or Not Helped Since Coming Here

On Keeping in Touch With People who Served With Them

Yeah, we are still in touch with people in the war who served in the war with us because after we left from Vietnam, we came here, had a reunion, and sometimes we call, we talk together.

Did you like coming to America?
I liked when we came here to America because my children grew up here very good, and we have freedom.

On Returning to Vietnam

I [referring to Bao] wish, when Vietnam has freedom, but now I don’t go back because now Vietnam is still Communist. You know about the Communists? Not freedom — when you say something, they can catch you and send you to prison.
Everybody came here, they wish to go back to Vietnam, when Vietnam has freedom, but now the Communists don’t have freedom. Because we live here all the time, we miss my country because over there we have family — parents, brothers and sisters– and somebody passes away but they have [the funeral] over there. We miss my country, I miss my country but when they [Vietnam] have freedom.

On Media Portrayals of the Vietnam War

Do you see that with the films as well?
No, not true. When they fought together, I [referring to Bao] talked about South Vietnamese who died — 5 [million] people — but the Communists, they say 100 [thousand] people died. I think that’s not true.

Thai Pham was a high school student in Vietnam when he was drafted to the Army of the Republic of Vietnam. He served in the army for eight years, fighting with the American forces against those of Northern Vietnam, but when the war ended and the Americans left, Thai was captured by Communist forces and was a prisoner in a reeducation camp for seven years. In the duration of the war, Thai was shot severely and required a blood transfusion and surgery. After his release, Pham was sponsored and emigrated to America. He now resides in Orange County with his family, fighting and winning the battle against Hepatitis C.

Bao Tran was a university student when he was drafted to the war. He is the brother-in-law of Thai Pham. Bao served in the war for five years, collaborating with America to combat the communist forces of North Vietnam. During the war, he lost many friends while his father passed away. After April 30, 1975, Bao was imprisoned in the reeducation camp along with Thai Pham. His release from the reeducation camp allowed Bao to emigrate over to America with his own wife and child where he resides with his family in Orange County.

Rui Huang is a freshman at the University of Southern California studying Business.

Steven Pham is a freshman at the University of Southern California studying Industrial and Systems Engineering.

Owen Slyman is a freshman at the University of Southern California studying Public Policy and Sustainable Development.