The Special Gift of Suffering 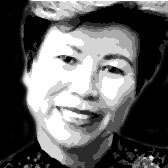 On Her Early Life and Transition to America

Growing up in Central Vietnam, in Da Nang city, if you look at the map of Vietnam, you can see how big the North and in the South, and how skinny in the middle. That is where I am from. The weather is very harsh– either winter too cold, or summer too hot. The war came way before I was born, and after I left in 1970, because of the hardship from the land as well as from the life itself, it [made] me a very tough lady, and hardworking. Thinking differently and survival is the number one. So to come to America, life is so easy, even though I did housecleaning for two dollars and fifty cents per hour. Some days I can do two houses. Those things are easy. The mental– that is hard. I miss my homeland, family, homesick. Been widowed first time when I was age 22, raising two sons, remarrying, widowed again when I was 36, raise 3 sons and seventeen children in the house.

But all those things, if I have to do it again, I would do it again because that is who I am today. All those things in life is a stepping stone–to lead one thing to another to another. I can see all different sides– rich, poor, well-educated or uneducated– it doesn’t matter. What matters is we are here now. What can we give back to the land, to society, to the country where you came from, and what you will do today. Life is very tricky if you know how to guide it, you know how to be a part of life and enjoy life, no matter what, and to be here in California, beautiful weather, very smart group of people, to education, to what you learn here. I mean if you have a chance to travel to a third-world country like I do, you will much appreciate what you have here. And to grow up with a hardship, and to grow up in the war, divided family, and witness what I saw, that is just a stepping stone to make me who I am today.

Looking back, seeing so many young faces today, I am very proud to have such an audience with mind, compassion, good education, and you can be whoever you want to be. You may like this country, you may hate it. That is up to you. You might vote whoever is aside you, vote is up to you. But one thing, at the end of the day, you are the only one looking back and either you will be proud of what you did or you will be regretful. And that is your own right. And at the age of sixty five and over, looking back all my life, I am not regretful of anything, only a regret that my dad died too young. And my mother died at hundred and two, ten years ago. But what I am happy now is to have you, to have so many young people. That gave me hope that somehow we are gonna bring a better future, for you and your generation. That is what I am so proud to be a part.

When I was in a village up to when I was fourteen years old it ate me alive until the war ended, victory bring peace to the land. My lover, my boyfriend, my dream husband, had a lot of children. He died and was buried at the same graveyard as my ancestors are buried. When war came so many people died. The more you see people die, the more you want to fight because there is no reason why they died. Nobody told you why they died except that they died you die for your father’s land. You die for what you believe in.  But the South Vietnamese and Americans believe in the same thing and the Viet Cong says the same thing. Nobody answers which side they believe in right or wrong. They are willing to die for their country. Our country is small compared to the US but it is big for us because we never go outside our village, but we are willing to die for our country. So we did what we had to do.

Now looking back I had a beautiful childhood. I had rice patties, water buffalo, coconut trees, pond, river, the things you don’t see over here (US) that’s what kept me going. When I left the Village and went to Saigon when I was working in the city you would see the rich with the refugee and jobless we would never complain. The poor villagers belonged in the village. We should be working on the land and be with our ancestors. But because of the war we had to become refugees, homeless, and jobless. This is what we had to deal with. This happened today in many countries. We never asked why we only know what propaganda said, the Americans and outsiders invaded our country and we fought for our ancestors graveyard, rice paddies and it was the right thing to do. So we did fight.

When I came to the US it was opposite. You come here to take care of the children, housewives and you keep your mouth shut and believe in whatever the news says. But little by little I became widowed twice and raised three children on my own. I start to question, why America and why Vietnam? Why this? Why that? You have your own mind and you play with it however you want. That is when I started to travel back to Vietnam in 1986 that is what opened a new door for me of new thinking, new questions and new answers. But who am I to ask these questions? I want to write books. I want to help Vietnam as a single mother with three kids and very little education background, what can I do to help? However my mind and my soul told me that I am equal to everyone. The only thing is my English is funny, my writing is limited, I’m a single mother and sometimes it held me back at times. But other than that I ate the same food as you, breathed the same air, thinking my own thoughts and have my own compassion and love like you. So it doesn’t hold me back. It just keeps me going. Unlimited thinking. Nobody pulled a gun on me in this country and told me what to do and what not to do like a young kid in a village.  So that freedom changed my thinking a lot and made me look back on what Vietnamese people had to endure and go through.

The entire refugee coming they knew nothing about the war and hated the commoners. It gave me a lot of thinking to do but then when the FBI came to me and told me to be a spy when I go to Vietnam and work for the CIA. I only could laugh at myself and think I’m a fool nobody knows what I am doing. But that’s okay I know what I am doing. That is the key knowing what you are doing for the good or for the bad but that is all on you. Do something that you won’t regret. Do something when you die people will still talk about you and people will remember you. That is important.

On the Reception of her Books and Truth

Powerful newspaper like Washington Post, New York Times and Los Angeles Times back in 1989 when my book came out, they gave very very good, positive review. I was grateful because I knew nothing about press. I just write a book. What did I know? But on those newspaper and press, powerful press behind you, and put me and my book in where I am today in Vietnam and U.S. together. I can only say that I am so grateful. Of Course, there are some newspapers, some press and people who thought differently. Those are their own rights. But I am saying that everyone has their own right, their own point of view and love and it is all fine. What I only want to say is that I accept everything the press say because they have their own rights. And whatever they say, I am so grateful. And before the book and movie and all that [was published], I had no idea how powerful press like Washington post can be. But until I worked for the press for thirty years, everything I can say is that if you do the right thing, no one can say differently. Truth is always truth. So I am just grateful no matter what happened. I am just happy that they can give me a voice, to read. Just like the question you asked, it is about a way to give back. And I am very grateful for that.

Born on December 19, 1949 in the small town of Ky La in Central Vietnam, Le Ly Hayslip was the sixth and youngest child in her family of farmers. At the age of 12, American helicopters invaded her village, and at the age of 14, the South Vietnamese government prison tortured her under the premise of “revolutionary sympathies.” Soon after, she was raped by two Viet Cong soldiers.

She then fled to Saigon, where she and her mother worked as housekeepers for a wealthy Vietnamese family. After she had an affair with her employer and became pregnant, she and her mother fled to Da Nang. She then met and married an American civilian contractor named Ed Munro, whom she had another son with, and together they moved to San Diego, California. After he died of emphysema in 1973, she married again to Dennis Hayslip, with whom she had her third son. The couple filed for divorce in 1982.

In 1989, Hayslip published her first and most popular book: "When Heaven and Earth Changed Places: A Vietnamese Woman’s Journey from War to Peace." In it, she talks about returning home to Vietnam in 1986 to see her mother and siblings. Today, she lives in Los Angeles, California, with her three sons. She is a founder of two charitable organizations: East Meets West Foundation and Global Village Foundation. Through these two foundations, she hopes to rebuild cultural bridges between Vietnam and America.

Jack Zang is a senior majoring in Biochemistry and minoring in Accounting. He was born in Shanghai, China and grew up in Arcadia, California.

Ryan Cenicola is an undeclared freshman from La Quinta, California. He is pursuing a career in the Music Industry.

Jingyuan (Hazel) Li is currently a sophomore majoring in Accounting. She was born in China, moved to Singapore 5 years ago, and is now in the United States for her college education.

Chase Koplow is a sophomore from Boca Raton, Florida. He is currently majoring in Real Estate Development and has hopes for a career as a developer.