The Good, The Bad, and The Betrayer 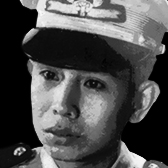 My name is Do Hoang Ke. Former soldier of The Republic of Vietnam’s Army. My unit number is 61/172657, from sub-sector Sa Dec, military district 4. I came to the States through the humanitarian operations of the U.S., which allows those who served for the U.S. or have been in prison for more than 3 years to come and reside here in America. Like other teenagers, I supported the conscription order for teenagers on April 28th, 1968. I became an official soldier of The Vietnam Republic to protect my country like other teenagers in the wartime. From then on, I fought with the Southerns until April 30th, 1975, when the Communist Northern Vietnamese crossed the Ben Hai border. They took over from Quang Tri all the way down to Ca Mau. They were supported by China, Russia, Cuba, Hungary, North Korea and all other Communist countries. Southern Vietnam’s ally, America, however, has withdrawn its troops, leaving Republic of Vietnam’s force to fight against Communists from all those countries alone.

Perspective of the War as a Southern Vietnamese Soldier

The U.S. Congress did not provide us with supplies in the war. Even when Republic of Vietnam’s president Nguyen Van Thieu asked for $350,000 of aid, he was rejected. While us South Vietnamese were fighting day and night on the battle fronts, we did not have enough weapons, gas to fuel our mobiles, leading to our unavoidable loss. Honestly speaking, through the war, it can be said that our friend, the Americans, were quite ignorant towards us Southern Vietnamese allies. On April 30th, 1975 when Northern Vietnamese Communists betrayed the Paris Treaty signed in 1973, the Americans completely ignored it. Although President Nixon had promised with South Vietnam’s President, Thieu, that if the Northern Vietnamese didn’t keep their promise, the Americans would attack the North, but nothing happened, and the Northern Vietnamese Communists kept going in. There was no way for us to win. We didn’t have enough bullets, gas, and even leadership. While they had Cuba, China, and Russia. We were on our own so losing was inevitable

When North Vietnam Took Over

When the French decolonized us, they took all their men and allies with them, leaving no one behind. The Americans, however, left our fate to the Vietcong’s hands, who raided us all. Over hundreds of thousands people died that April, 1975. If it isn’t genocide, what is it then? And so when the Viet Cong took over, they killed our Southern soldiers by smashing our skulls. Towards the last day of the war, there was a squad of twelve people in Saigon forming a circle around a statue in Cho Lon. They said “Long live Republic of Vietnam!” and then killed themselves by setting off bombs in their hands.

I went to jail for five years and two-and-a-half months at the Chi Hoa Jail in Saigon. It was a jail, not a re-education camp. I was locked up while the people in re-education camp have to suffer labor. They worked in the fields, rice paddies and such, they certainly had more freedom than I did.

How was I treated? Nothing can be worse. After the first 18 days, I was drained for the next five years and two and a half months. My hands couldn’t move at all. I didn’t even have the energy to sit, I kept falling. I couldn’t walk for five years. They fed us cassava and boiled spinach. That’s it, nothing else. We valued every grain of salt. So some of us gathered up and pretended like we had a sick person so they’d give us some salt and all we got was a teaspoon. We had to split the grains among ourselves. No word can be used to described how appalling it was. I almost died three times. They said that we had already had enough of luxury back then so now they have to cut down our food, and that was Le Duc Tho who said that. Every single grain of salt counted. When you were sick, they said they’d give you porridge but it was just the water they used to boil cassava. All the patients were paralyzed.

The only food we had to survive was supplies from our family. You can only visit the prisoners once a month though. You have to write a letter to schedule your visit in a limited amount of characters. If they didn’t like they way you wrote it they’d tear it apart and ban you from visiting your imprisoned loved ones that month. That’s why after all those tortures, oppression, and slavery, never did I want to return to Vietnam. I came here in 1992, now it’s 2016. It’s been 24 years and I never wanted to go back.

When I was in prison in Chi Hoa, when we were gathered up in a meeting room, we were all made to stand up for the national flag. However, a priest refused to do so. Afterwards, he was asked to stand up and answer why he didn’t salute to the flag. He said: “the red flag with the yellow star is not my nation’s flag. Mine’s the yellow one with three red stripes.” The yellow represents our skin color, while the three red stripes represent the blood of North, Mid, and South Vietnam. “That’s my national flag.” He disappeared after that and nobody knew where he went.

When they were trying to teach us the way of a Communist, there was a 16 year-old boy who came to lecture us. He rudely asked why us former Southern Vietnamese officials were so idle in the class. He said Communist Vietnam is a utopia, that our country has no prison. A man stood up and said: “What is Chi Hoa then?” “What do you call the fact that we’re locked up everyday then?” He turned red and shouted back: “I am the victor, if I point at a dog and say that it’s a chicken then you have to obey me and call it a chicken!” We didn’t know what to say. How is that not dictatorial? They were all acting stupid. Literally all the security guards at the Communist jail were 13 to 15 years old. Their way of speaking was literally savage. They were all like: “You listen to what I say, I’m the king here!” 16 years old and calling himself king?

Getting to America was very challenging as well. They’d charge you with all kinds of fee to the point where you don’t have a penny left in your pocket. I said to them, what do you want me to pay, write it all down on a piece of paper, sign it, stamp it, and I’ll pay it. If my paperwork gets submitted late, I’m going to sue you. They stopped charging me after that. I left Vietnam in June 1992, and they asked for my 1993 taxes.

The Struggles of Those Who Fled Vietnam

The Vietnamese community here in America–the reason why there are so many thug gangs is because of the Americans as well. The Americans left Vietnam in 1975 in such a chaos. Vietnamese people were literally fighting each other to get on to those departing US ships. The ships leave when they’re full. Most of those who successfully fought their way onto the ships were thugs and gangsters. Unlike the French, who only let qualified anti-Communists on. Literally anyone could get on to the American ships so when they made it here, they didn’t have the education qualified to work.

The boat people though, mostly are anti-Communist Northern Vietnamese who fled to the South in 1954. They fled once, and now they have to do it again because they were so afraid, even more afraid then the Southerns. And so they built rafts and bought boats to flee. The Viet Cong, however, handled this situation in a very malicious way. They have two ways. One, if they capture you, you will be punished as a “traitor.” Another scheme is that, they let you go “legally” as long as you tell them how many people you’re letting onto the boat. They let you set sail, but when you’re out in the sea, they’ll have their ships kill you and they’ll throw your bodies into the ocean. They’ll take all your money and properties as well. The Viet Cong were that wicked I tell you.

As long as Communism lives, I don’t think the people can be happy–whoever said that I have to agree with them. The second President of South Vietnam, Thieu, once said, “Don’t believe what Communism says, look at what Communism does.” It is still relevant today.

This entry was posted in ARVN, Fall of Saigon, Profile, Viet Nam, Vietnamese. Bookmark the permalink.

One Response to Do Hoang Ke

Do Hoang Ke was a soldier working for the U.S. force in Vietnam during the Vietnam War. He was born in Sadec, Dong Thap in 1941. He joined the Republic of Vietnam's Army when he was a teenager in 1968 and fought until April 30th, 1975. After the war, Ke came to the U.S. in 1992 after serving jail-time for more than five years. Since then, he never returns to Vietnam. As an Anti-Communist, Ke struggles to decide whether he should return to the country but one thing is certain: he misses it very much. He currently resides in Santa Ana, California with his wife and son. Since he does not speak English, he is unemployed in the U.S. and his wife supports the entire family by working as a manicurist. In addition, they are provided with living supplies from the U.S. government on a monthly basis. Their son is now studying Biological Technology at UC San Diego.