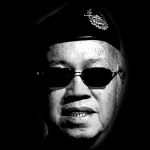 Life During the Vietnam War

It is a simple question, the communists from the north were trying to take over the south

My name is Truong Vo I joined the army of the Republic of Vietnam in South Vietnam, during the Vietnamese War. The reason is that communists kill people. I wanted to protect the people in South Vietnam.

The first day I joined the war, I was very happy because I can protect people in South Vietnam and family. On the last day, because the US left South Vietnam, we could no longer fight against the communists so we had to surrender. I was very sad about that.

So, I remember back in 1968, when the US army came to Vietnam, they saw some weapons there. They were asking people: why do you use something like this, these are really really old. That’s why the US Army provided them something they had never used, it was not new technical weapons.

During the war, my life changed because the resilient of the army is different from the freedom outside.

I felt sad and sorry for the people because when we were fighting we were using inferior and old weapons against the communists. We used guns from 1949 while the communists had something more advanced.

The most valuable experience I learned is how to work together as a team. This is also one of the key lessons in life.

After the end of the war, I attend a communist relocation camp for ten years. After the camp, the country did not look happy.

Life After the Vietnam War

The most challenging aspect of living in the US was the language barrier. Because when I was in jail/relocation camp they limited us to speak another language than Vietnamese. After ten years in the camp, I was very old so learning another language was difficult.

I returned to Vietnam twice, the first time was because my mother-in-law passed over, the second time was because his mother passed over. After he returned to Vietnam, I felt like life there has changed a lot. It’s not safe anymore. And life there really depends on how much money you have, if you have a lot of money you can buy a pass through anything. And robbery is everywhere in Vietnam.

Some people remember the Vietnam War because the communists were very bad. They did not protect the people. They fought for a different thing. Even in America, those Vietnamese War communists fought for their own benefits. If you want to learn more about the Vietnam War, the best way is to people who served in the army once. Do not base your judgment on the newspaper or the internet, maybe they would mislead you.

I have much respect for those who died in the Vietnam War because they tried to protect people and keep them in safety in order to live a good life.

Additional Commentary of our thoughts and thanks for Tommy’s Grandfather Truong.

We respect Truong’s duty during the Vietnam War, showing bravery and dedication to protect his nation and loved ones. We thank you for your service. It was our honor to listen to your story and sharing it with our classmates. Your gratitude will turn into a critical piece for future students studying the Vietnam War. Thank you.

The greatest takeaway from Truong’s story is that separation is more regretful than losing the war. Unlike those who feared going back to Vietnam, Truong believed in Vietnam once more, calling it home. Despite the unfortunate changes during his leave, as he complained during the interview about crime, he had to chance to reunite with his mother before sending her off to a better place. We believe many Vietnamese War Veterans still hope for reunions with their family in Vietnam. But the traumas from relocation camp/ jail frightened many to return. It is a shame that the American Government caused millions of families to separate, even though many times US politicians promised a cooperative world.

Truong’s story will add to the understanding of the Vietnam War. His words perform better than any general textbook. We would like to thank you for taking your time to learn from Truong’s war experience.

In October of 1942, Truong Khac Vo was born in the heart of Saigon. Growing up, he spent his life dedicated to school as a student and helping his family's pho restaurant. However, persuaded with the promise of protecting the country, he left his simple life and into the hands of the Vietnamese Armored Cavalry Corp. With weekly visits from his family, he experienced the highs of driving tanks and the lows of becoming a prisoner of war at the peak of the conflict. He worked hard to climb through the ranks and onto captain of the corp, and his efforts were recognized well after the Fall of Saigon. After the turmoil, he immigrated to the United States on political asylum and started his new life in a country with a new language. With years of experience, he hopes to educate the newer generation by answering questions and becoming a source of perspective.