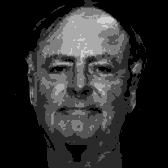 I joined the army and went immediately into flight school, the war officer flight training program, and that was in December 1965. I graduated flight school December 66 and immediately went to Vietnam and I flew UH-1’s, that was called the Huey, which was the signature aircraft of the Vietnam War and I flew Hueys there for a year. [I] turned 21 my first tour in Vietnam and got my first Purple Heart when I was 21. I look around sometimes, I see 21 year old people and I think , Was I that ready as they are for what they did or was I that experienced. Was I that mature? To be handed some of the tasks I had because I was an aircraft commander…I was in charge of a million dollar helicopter with a crew and a copilot and everything like that. I think I handled it well and I look back on it. How in the world did I do that. How did I get myself into it? How did I survive? But I really appreciate the experience.

First of all you get the Purple Heart for minimal wounds or big wounds. I was more scared than hurt. There was more urine in my flight suit then there was blood on me. We were landing some troops in an LZ and we landed in front of a 50 caliber machine gun, it opened up, shoot up the aircraft, and a little misnomer about bullets and helicopters and purple hearts. It wasn’t the bullet that hit me it was the shrapnel from the windscreen, from the instrument panel, the plastic, and everything that was flying around the cockpit. I got hit in the face, the leg, and the hands, but minor shrapnel wounds, and that was my first wound.

A Hooch on the Beach

I was in the northern part of the country, which was called first Corps, I Corps, place called Chu Li. Which the marines had built up but they had moved further north on the other side of Da Nang we were about 40 miles south of Da Nang. But it was nice we were right on the beach, had a hooch that faced the ocean. Could go swimming. It wasn’t bad cause every morning you’d get breakfast, probably had C rations for lunch, and if you got home in time you got a warm meal and a dry bed so I can’t complain about the location.

First time I got shot at I did not even know I was getting shot at. We were flying and I was a copilot talking to the pilot in command and saying something and he says, “Shut up! we’re getting shot at.” I don’t know what I had a vision of getting shot at was like but it was a clear day like today and I kinda put my ear toward the window and I could hear a little pop pop, rip rip, pop pop and it was small arms fire coming up but it was during the day so you couldn’t see the traces very well and the Viet Cong and North Vietnamese used Soviet weapons and Soviet ammunition and their tracers were green and yellow while ours were red or orange and I didn’t know that either. So you couldn’t see this stuff in the clear in the bright sunlight and that was my introduction to getting shot at – didn’t even know it was happening.

Going in for all intents and purposes I joined the army as a teenager at 19, graduated when I was 20, turned 21 on my first tour in Vietnam. Going into the military is a growing up process. Going to combat takes it to another level of realizing who you are, how really scared you can get at some times and what you can do and what you can’t do and understanding definition of fear and friendship.

The Ugly Side of War

If you’re a professional in war there is no hate – it’s combat and you’re fighting for your country. Now maybe what’s going on in Libya between Kadafi’s forces and the rebels, there might be a little hate going on, and that is where atrocities come out, but professional armies fighting…I don’t hear of any hate. There might be jokes or there might be a little “Whoo Ah” or “Rah Rah” stuff going on but I don’t remember of anybody ever saying I hate Ho Chi Minh or I hate the Viet Kong. I don’t recall that.

The Politics of it All

Well I supported it then and I to some degree still support it now, even though we left under less than winning circumstances. The American army didn’t lose the war, never lost a battle, but Buy diflucan online probably lost the overall conflict. Having said that, the Domino Effect did not really occur. The Vietnamese are friends of ours. There are issues left over from the war but I think we left that area probably looking back on it their economy’s starting to improve; we’ve opened an embassy there. So by leaving Vietnam we probably did just as well if we might have won the war.

Tom Lasser was the best commander I ever knew. He was a top of the line leader, mentor and great friend. None better……and I’ve been around enough to speak from experience.

Enjoyed flying with you. A great teacher in the cockpit.

Lieutenant Colonel (LTC) Thomas Edward Lasser retired after completing 40 years of military service. He spent seven years on active duty with the US Army and another 33 years with the California National Guard. Thirty years of that which was fulltime status with the California Military Department. Tom is a Vietnam veteran. He is now consulting for his own firm, T. E. Lasser & Associates, LLC. He earned his Army aviator wings after completing the Army Aviation Warrant Officer Aviator Flight Course. He flew UH-1 Hueys in the Republic of Vietnam and after receiving a direct commission, he completed another tour in Vietnam flying Boeing CH-47 Chinooks. LTC Lasser then transferred into the California Army National Guard following his second tour of combat duty. He is a master Army aviator with over 6000 flying hours including more than 1000 helicopter missions in Vietnam and almost 1800 combat flying hours. His military decorations include:the Distinguished Flying Cross (DFC), Purple Heart, Legion of Merit, Air Medal with 35 Oak Leaf clusters, Meritorious Service Medals, Bronze Star and other commendations, service awards and campaign ribbons which reflect over forty years of military service. Unit awards include the Valorous Unit Award, Army Superior Unit Award and Vietnamese Cross of Gallantry.