Avoiding the draft, by enlisting 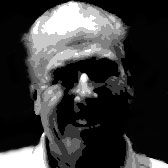 Obviously, we were fighting Communism was the thing. You know I knew the French got run out, they lost their war. They had been colonizing forever and basically there was no north and south and it was sort of the U.S. that made a North and South [Vietnam] and put a puppet government in the south. But it was Communism. In the north, the USSR, their style Communism was being infiltrated into the South and we were trying to hold it off. Even though you say the South but it didn’t exist at that time that was in the fifties I think and then we started putting people in there and it just escalated. Most of that is not what I thought, at the time it was purely Communism, but as you read about it, get older and investigate what you’re doing then you learn what was going on. But yeah, it was purely Communism.

Portrayal of the war in media, now.

Well, Apocalypse Nowis my favorite movie. You’re right on the river, if you see those little Mike boats [shallow draft troop transports], look at the little house in the back there’s two gun mounts on each side, those are twin fifty calibers and so sometimes on a landing party I’d be on one of those twin fifties. You would run up be running up a river the beach or something, and you know, it’s just like Apocalypse Now, except those who are swift boats or river patrol boats. Before I went, there wasn’t a lot [of war portrayal in media]. There was only news, no movies. It’s the same as it is now. We’ve got everybody in there training the South Vietnamese Army, now we’re training Kurds and everybody else to fight Isis, so I mean it’s the same kind of thing.

Exposure to the war before enlisting

I remember mostly the body count, it was pure body count on TV. I mean every day it was how many got killed, how many we never knew, how many we killed but how many of us got killed and wounded in action. So yeah, but there was no influence [in the Hollywood or other media] all that time. I was working and my deferment went, trying to stay out of it and just enjoy life you know and probably the only thing was I didn’t want to get drafted. I didn’t want to go in the Army or Marines because all you saw was the Killed in Action. As soon as my draft notice came, so happens that my girlfriend at the times dad’s best friend was Admiral Byrd, in charge of the Long Beach Naval station, and he said I’ll call him. In three days he had my draft notice rescinded and had me in the Navy. I would have been in the Marines, and God knows what would the outcome would’ve been. I have all the respect in the world for the Marines, for what they do. [youtube https://www.youtube.com/watch?v=8w_9AcbEeHY]

Perceptions of the war

You know I looked at it as a great life experience and you sort of remember a lot of fun times and things that were going on. We had a great captain, well we changed captain’s part way through, and the new guy was a great guy. He would go over and take the Marines, put a perimeter on the beach, and run all of us from a ship and leave a skeleton crew, anchor it, run in, and have steaks and barbeque, and everyone was allowed one beer, because you carried beer on the ship and they’d bring it all over, and marines had a perimeter and we just sit there and go to a swimming and a surf, then do stuff for two hours and you’d go back to your duties and that was it. You know those things you remember. You go out of the ship and, they carry three hundred marines, and then you would go do an operation and you put  three hundred marines on the beach and then you pull away and they go off and do their thing. Now the thing is we’d go back and pick up marines and bring them back, but it’s not like we pick up what we dropped off, in equipment and in men. So it’s like, okay, where are they? Are the just off doing other operations, got divided, are they killed, are they wounded? That’s all I’m saying. You never know, so in your mind you hope for the best. It’s just one of those things. Yes, I was in the warzone, but I was divorced, I didn’t see all the stuff going on over there. We saw it from 2 miles off the shore, one mile off, whatever we operated based on the depths, so the boats had a short run to the beach. [youtube https://www.youtube.com/watch?v=j18Mw86on_c]

His perception of Vietnam now

Well, my view past the war is that Vietnam right now, next year we’re hoping to go, I want to go back because it is a gorgeous country. I mean from looking at the beaches and the jungle, and even if the time that I was ashore in Danang the people were very friendly which you never knew because you never know who was who. So they’re always going to be friendly, you never know what they’re going to do. But now Vietnam basically is almost a free market. I mean they’ve done very miraculously because the country was destroyed and it was totally leveled. You watch those bombers come in and looked behind him and you don’t see the destruction but you see the fireballs and smoke. It just goes on 24 hours a day after day after day. I mean it’s just, it had to be annihilated, the entire infrastructure. Where they’ve come to and basically they’re not the old communism. Yes, they’ve got an authoritarian government, but it’s a free market. I mean you’ve got a lot of companies investing over there.

How his service affects him now

The whole serving in the service effects of my life changed my whole life direction, and that’s what made me going to school. I realized that I needed a degree, to be what I wanted I found myself hanging more with the enlisted men, but I enjoyed my time more with the officers. It wasn’t so much being in Vietnam that changed it. Just the total experience and seeing other parts of the world.

This entry was posted in American, Profile, The Draft, US Navy. Bookmark the permalink.
Login
0 Comments
Inline Feedbacks
View all comments

John "Randy" Weaver was born in 1945 in San Diego. In October of 1966 he joined the United States Navy in favor of being drafted into the Army or Marines. He served active duty from 1966 to 1968. In 1968 he was serving in the combat zone ( Danang, Camron Bay, and Murder Beach) for nine months. He was finally discharged in 1972. He returned home to the U.S. and graduated from the Marshall school of business at USC.