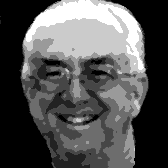 The Vietnam War in the United States portion, would have been just before my eleventh birthday because that’s when the Gulf of Tonkin Resolution came out. I know that because I checked it when Elsa said she wanted to talk to me about it, and I wanted to make sure I had the date right.

So, it’s the beginning of August when that came out, right before my eleventh birthday. When it started it didn’t mean a whole lot, because I was a kid. You know, so you’re looking at sixth, seventh, eighth grade. Once you get to High School, and you become a bit more aware of what’s going on, you start forming more opinions on it.

I wasn’t real thrilled, because in High School was, of course, when you start talking about the draft which they had at that time. The draft at that time, you had a good chance if you got drafted, it seems, of being shipped overseas to Vietnam. When you’re 17, 18, 19 years old, going over there and getting shot is not high on your list of things that you want to have done to you.

I did get my draft notice, as I said, however when I went up in early December of ’72, when you go in the first thing they do is they take your height and your weight. My height was 6 foot 2 inches, and my weight was 127 pounds. At the end of all the stuff that they do, they said I failed and I asked, “Oh, is it because I’m colorblind?” Which I am, and they said no it’s because I’m 11 pounds underweight and therefore I didn’t meet their qualifications.

I will tell you that about three weeks later I did run a marathon. I ran, I think that was the year I ran 2:27:30 for a marathon, so though I was underweight for the army I was still actually in pretty good physical shape.

They did send me a notice after this first round that started the letter “Dear Mr. O’Callaghan, we’re sorry you didn’t meet our physical requirements…” I got a six month deferment to hopefully overcome my physical disqualification. In March of that following year, if I remember right it was March of 73, the Congress voted to stop the draft so I didn’t have to worry about it anymore.

My mom and dad weren’t really too keen on it, which in some ways for folks is surprising. My mom and dad were early teens when WW2 was going on, so they knew what could happen in a war situation but they also knew why you would be fighting a war. In this particular case, for Vietnam, they weren’t really too keen on the whole reason for being over there. The folks you were fighting for, to some degree, didn’t really seem to care. There wasn’t a lot of support, seemingly, over in Vietnam, or even in the United States by the time I was old enough for the draft.

At the time of the draft they had a lottery system where they not only pulled your birth date, but they also pulled a number one through 365 and that would determine which order you would get drafted. For example, they pulled my birth date August 28, and then the number they pulled for the corresponding rank of where I would be was 40th, which was kinda unfortunate because I have 4 sisters and of my sister’s birthday, the closest one to me was well over 100. So, as the only one eligible for the draft, I had the misfortune of getting number 40, which of course is why I ended up going for my physical and ended up failing it.

In terms of what my folks thought, as I said, they weren’t really keen on the fact that I could get drafted for this. What surprised me was more so than just the general attitude, was my mom said that she would be more than happy to buy me a plane ticket, a train ticket, a bus ticket, to Canada so that I would become a draft-dodger, which at that time a number of young men did instead of going into the military because they did not believe in what was going Buy toprol xl online on in Vietnam. A number of them fled to Canada to set up home there until such time as they could come back and not have to worry about getting drafted or prosecuted for evading the draft.

America’s View on the War

When the Vietnam veterans came back, a lot of them were looked down upon, unlike WW2 where they came back heroes. The Vietnam veterans seemed to be accorded some kind of, for lack of a better phrase, second class status. I think that partly is due to the fact that WW2 was a world war, we won, the allied forces won, because it wasn’t just us of course.

In Vietnam we picked up where the French left off, the French were in there fighting the same war we ended up fighting. The French finally realized they weren’t going to win so they pulled out but the U.S., kind of with that attitude of being policemen for the world, stepped in with, as I said, at the beginning with the gulf of Tonkin resolution which was found out, if I remember correctly, later to be maybe not quite so on the up and up. The report of the incident that led to the resolution, I should say, not the resolution itself.

So, people just felt duped and lied to, misled, and as I say there didn’t seem to be much support even from Vietnam so people were questioning why were we sending our young fellas over there to get killed for people who didn’t seem to appreciate what the heck we were doing.

So when those soldiers came back, the general feeling, and this was of course not everybody, but the general feeling was it was a bad thing. And I think people in a lot of cases wanted to have the out of sight out of mind concept, so those folks that came back from Vietnam really did not get the due accord and due respect that I do feel they should have.

That is a tough question to answer, Elsa, “have we learned anything”. Yeah, we’ve learned things. A lot of people have, including myself as we’ve gone on. Just because we’ve learned things, I will say, doesn’t mean we’re going to do anything differently. We may have learned it, but that doesn’t mean we’re going to use that knowledge in a better way as opposed to just run over ‘em with a tank and superior military might.

However, some people may not want it in the same sense that we want democracy. They look at us as invaders, and one of the things I think people tend to forget and not think about is what would we do if some foreign country sent its army into the United states. Essentially we’d fight like hell for our homeland, and that’s what those people see themselves as doing. We’re the aggressor, we’re the oppressor, and theyr’e fighting for their homeland and what they believe in, which is the same thing we would do if we were invaded.

So, in some ways no we haven’t (learned anything) in some aspects, I’d say we probably have learned some things, we’re a lot of times I think maybe a bit slower to jump in, which some people get on… Whoever is gonna be president and whoever is secretary of defense we need to get in there and say to these people… but I think some people are realizing that we can’t be police to the world, you cant be, not everybody’s gonna want it and when you go into someone else’s country just remember it’s like fighting for our home. They’re gonna fight us because they see us, again, as invaders just as we would see someone else coming here.

Hopefully this helps, and like I say, gets some people thinking and discussion because that’s always a good thing. Maybe one of you folks watching down the road here will come up with a much better answer than I can as to how to take care of all these problems that seem to crop up where we’re the policemen for the world.

Michael O’Callaghan was the only boy in a family of five children. Growing up in Arizona, Mike became an avid distance runner, competing at a collegiate and national level. When his draft notice came in December of 1972 for the Vietnam War, he reported for his physical evaluation, only to be turned away for inadequate health standards. Three weeks later, he ran the best marathon of his life. Health, for the military, is relative. Mike’s parents were relieved, and his mother offered him a bus, plane, or train ticket to Canada before he was to re-report the next year. Fortunately for Mike and his family, the war ended before he could report to the draft board again. Mike stills lives in Arizona and is married to Jeni O’Callaghan. Together, they have three children. Mike works as a middle school math teacher, and is still fully involved in coaching track and field and cross country. He is still running marathons.