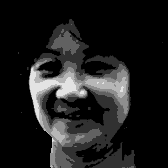 In fact I was born in North Vietnam, and then in 1954 we have one war already and then we drove from north to South Vietnam because we did not like Communist.

The Communist from North, they run down to the South and they won. They won it and that is why we run again, and we escape from Vietnam.

You know that from 1954, when I was really young, I didn’t know, I just followed the parents. But anyway, 1975, a lots of thousands, a hundreds thousands Vietnamese escaped from Vietnam…. I am sorry when I thinking about that, really emotional, when we have to abandon all the things, the place, the homeland. Or some peoples have to leave the parents, even the childrens, the wives and husbands, and try to escape from Vietnam as much if we can because even we think that, well, when we go to the sea, maybe we die. Ninety-nine percent die, just one percent we can alive and go to another country but we still go, we have to go.

Let me see, 37 years already, I really still have a deep emotion about that. Also about my trip when I escaped from Vietnam it was really, really terrible.

And they call us boat peoples. When they talk about that so that mean, oh no, we know that you escaped from Vietnam by boat. Very later, like my boat, is break on the sea. And if we don’t have another boat from Malaysia, a big boat, we die all. We organized the boat, trying to escape from Vietnam, so they go over there a lot. We planning to go just 70 peoples, but at last, 149 peoples on that boat. More than double, so that being really, really overload. So that’s why we are on the sea for five days and six nights. Every day we just have two of these water, two for whole day, for each person. One in the morning and one in the afternoon. Water and that’s it. So we really starving and we really thirsty.

During the trip, we also saw pirates, yeah, pirates. Thailand pirates! And you know that boat really big and pretty. They paint, they have something, something, and my boat like this. And at that time we have two big boat, one in the front, one in the back, and we in the middle. They don’t say anything. They just follow, follow, follow, follow us. Oh my gosh, everybody really scary, because we know that if they catch us, we have some story already, that mean even the childrens, eight years old, oh no, if fact the girls eight years old, they also rape her. Or the ladies over sixty years old already, they rape her too. So any woman, girls on the boat… was raped. So that’s why we so scary. So we pray, pray, pray a lot then, but we don’t know why, at last, they just go like this and they go. Oh my gosh, everybody just can’t say, can’t have enough thanks to talk to the Lord, the God.

After that, right now, we also, lots of people also say thanks to the America because we say that they think that they have a responsibility about the Vietnamese War so they more open their arms. When we go over to America, usually we can go to here by the sponsor from blood relatives. If you don’t have that, another situation is you a minor, you under 16 years old. The America accept all, all children under the minor come here and they would have some individual sponsor, like a husband and wife, or some peoples as sponsor of this child, that child, something. Or the church. The church, they also sponsor for a group or for some people. So they come here. Otherwise like me, I have my brother he live in here already, a sponsor for. When we come here, the sponsor have to take care of our life. But because we are refugee, so government also support us by like a welfare program, with the money, cash aid and food stamps. They support for us for the first time that when we come here. For a while, if we can sturdy, we can get a job. So little by little we get out of program. Like that. So also they have us one the first step like that to let us have a good situation to adjust to the life in here. 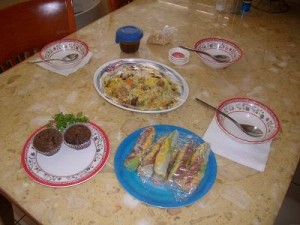 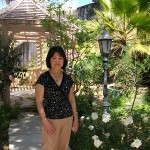 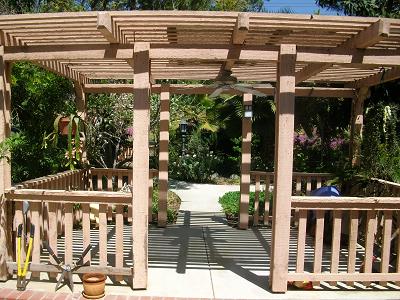 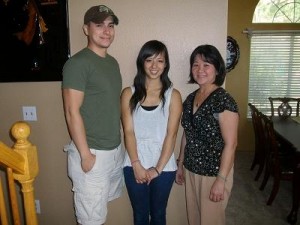 Mary (changed for privacy) was born in 1954 in North Vietnam, but was quickly swept up in the movement of people relocating due to the rising political energy associated with the Socialist Viet Minh and liberation of the North. The family went to South Vietnam when she was just a baby, the same year that Vietnam was divided at the 17th parallel. Her family had been Catholic for some generations and she was brought up with this spiritual background. She grew up to become a teacher of elementary school children. She did not follow the politics of the war closely, but had a brother in the Navy of South Vietnam. Following the year 1975, knowing the victory of the war was in the hands of Communist power, Mary and her family attempted to escape Vietnam on multiple occasions, some of which resulted in prison sentences. With only a son of four years old, and her brother's immediate family, she managed to finally leave Vietnam with 148 others on a small boat meant to hold half as many. Thus, her and a few close relatives became part of the Boat People, or the largest exodus of Vietnamese refugees in Vietnam's history. In transition, the family was educated in the Philippines on what was to be expected in America, where Mary also had another son. They arrived in California in 1985. The experience, as outlined in her testimony, was one that lives strongly in her memory and will always be remembered as a blessing to survive. Although many boat people arrived in America unwillingly, Mary expresses a deep gratitude for the life she has developed here, for the quality of education for her two sons, and the ways that people are able to live freely and speak up about inequalities. She admits that there is good and bad to every situation, and holds traditions that feel right to her, stemming from a life of two worlds and the experience of the journey between them.

Raelynn Gardner was born in Southern California, but grew up in Florida. She moved back to California in 2004 and went to Riverside Community College for a few years, renting in various Riverside locations, one of which was a house that belonged to the interviewee. She transfered into USC in 2010 as a biomedical engineer major and lives near campus.

Jason was born in Upland, California, and is currently a film and production major at USC. Prior to being a student here, he served as a tank crewman in the United States Marine Corps.

Corey was born in Paterson, New Jersey and moved to Southern California 8 years ago. He went to Rutgers University in New Jersey for 2 years before transferring to USC. He is double majoring in Psychology and Economics at USC.