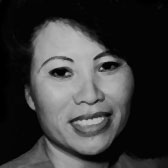 Thoughts of Her Family and the War’s Effects

Professor Nguyen: I want to show a film clip from, the end of your film where you talk about forgiveness. Right, because it is such an amazing piece. This film clip from the film it is pretty faithful to the way your first book ended. Basically the film clip says: You returned to Vietnam, you had sort of tense reunion with your family but in the end you really emphasize this message that forgiveness if possible for everybody. That means you forgive your family, they forgive you and you also forgive American soldiers. It is a very important theme of your book, and you begin and end with this idea that no one is utterly responsible for the war, but instead everyone is a victim of the war. Was it hard to get to that point of able to forgive, given everything you saw in terms of the war and what you talked about in the book?

Le Ly Hayslip: When I left my village in 1964 at 14 years old, They taught me to forget marriage. All South Vietnamese. Because of how much I respect my father and my village. But, in 1970 I moved from Vietnam to U.S. I didn’t get to see my old life, my own mother, or my father. I understand how they struggled because their children didn’t live with the them. How could you condemn them? How could you not feel sorry for them? I feel sorry for my father. I left him. With all these mixed feelings, little by little I loved him more than I did in the beginning. I don’t have hatred. The forgiveness came when I really understood about it. In 1975 when the first Vietnamese came, I helped to establish the first Vietnamese in the temples.

So I started to volunteer everyday and practice understanding and forgiveness. And, it is not very far from what you believe in the village. You live in a village for one hundred years just like my parents, and from 1925 to now the house is still there. They’re still drinking the water from the same well. They’re eating the same food that from the harbor and from the land. So you cannot do something that people condemned you for. You have to face everyday the things you had done. So you cannot call people bad alone and you have to forgive and let it go; but first forgiveness is for yourself. Oh I have a lot of guilt. My two husbands died on me. My father died on me. My brother Sau died on me. I left my mother. I mean I have a lot of guilt. I have a lot of praying to do. But, they’re all dead. They’re all gone. I am here. If I don’t forgive myself or move-on in someway, I will be the one dead.

Relationship With Her Father (4:00 In Video)

The Vietnamese father is looked at differently than the American father. My father worked very hard in the rice patties. He worshipped our ancestors every day. He made sure that the children had food on the table. And so because I am the youngest, I became his favorite daughter. The relationship between my father and I was very special. He was an income provider. I would get the cat and the dog and go down to the pond and fish with him. I would help him work in the rice patty. I became not only one of his daughters, but a worker alongside him and my mom.

And, the harder thing for me today is that when I left home at 14 years old, he missed me. But I couldn’t find my way back. After the war, he told me that he would look into the distance from the hill, towards where I used to walk home. He waited and waited. That memory never left me. The relationship of a father and mother in Vietnamese culture is very important. For us, because of the war and hardship, we had nothing except each other. They are here for you. The love from the parent, to hope the daughter will become a good wife one day, and find a good home. Here, it is very individual and very selfish. It is a different kind of bond in America.

Student Question: When you were in America, and you heard people say that Vietnamese people were the root of all these problems, did you ever start to believe that yourself a little bit? Or were you always resistant to that idea?

Le Ly’s answer: I believed it a little bit because of the level of education I received. That is my loss. However, I am a complete human being. I have my own thoughts, I have my own heart, and have my own beliefs whatever they may be. Of course, ten people had ten different ideas. Ten questions and ten answers. I had one that was good for me. To be a wife, to be a mother, to be a good U.S. citizen, to be an honest human being, and to work very hard. That is what I believe.

Her Experience With American And Vietnamese Reactions When The War ended (8:40)

My sister had two children who were half American and half Vietnamese. In 1975, she sent me a telegraph and said “you have to bring me to the US because my children are half American and the Communists are going to kill them. I promised my old boyfriend that if he could get them back to the U.S., then I will marry him. He took my ten thousand dollars to Vietnam, and got them out on March 28, two days before Saigon fell. In those five days that he was gone, I thought that they were dead. When my sister came, I was happy that the war ended. My husband hated the Communists. Why is Communist such a big deal? My brother went to North Vietnam when he was four years old and became Communist. My husband said that the Vietnamese should stay where they belong. I just decided to zip-up my mouth and not say anything. My children told people that they were Mexican, not Vietnamese. I was lucky to come and live in a middle class neighborhood. Some felt sorry for me for what I went through in Vietnam, and some said that I should go back with other Communists.

I had no voice, no face, and not even a name to say I am Vietnamese. So, about why the book came out, With that mind that people had, it gave me something to go off of. When people give you an attitude about something because they don’t know any better, you don’t fight with them. You fight with yourself, and find a way out. Find a path through which you can express yourself.

Ly Le Hayslip was born in Ky La, Central Vietnam, in 1949. When she was 12 years old, American helicopters landed in her village. She endured torture in a South Vietnamese government prison for "revolutionary sympathies" at the age of 14. Her adolescence was torn by the Vietnam War, and she has been a victim of the horrors of the war for most of her life. She moved to San Diego, California, in 1969, and has lived in America since then. She has written the memoir "When Heaven and Earth Changed Places" (which inspired the film Heaven and Earth) and the memoir "Child of War, Woman of Peace." In 1988, she founded the "East Meets West" Foundation, which physically and emotionally helps to rebuild lives on both sides of the world. Through her foundations, she became a bridge builder by bringing American groups back to Vietnam to help restore her motherland and open the dialogue between the two nations.