A Can of Coke 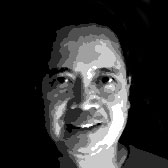 Stephanie: Hi! So can you introduce yourself?

Stephanie: Can you describe your childhood?

Mr. Bui: I was raised in a middle class family. I went to a really really good school. Overall I am very happy with my childhood during the war.

Andrew: How did the Americans treat you?

Mr. Bui: So far I was very happy to see Americans around the city. I want to say that I love American food.

Bulat: What were some of the characteristics of the communist regime that you did not like?

Andrew: How old were you when your family decided to uproot and then move to the United States?

Mr. Bui: I was in high school at that time and like I said I had a lot of friends. But, you know, I just had to follow my dad’s decisions. We took the chances, we knew that we could die out there in the ocean, but that was the decision my dad took. Looking at it, I am not sure if I would be brave enough or gambling enough to take this decision.

Andrew: How risky would you say it was to completely uproot your whole life?

Mr. Bui: Everything will be gone if you get caught. So, my boat… we had a group of about 100 people and we just went straight out from the seaside.  About a few hours after we got on the boat, we were chased by the coast guard. I heard them shooting at our boat, and we had to stop because they had a much faster boat. Luckily for us, they collected the watches, the jewelry, the money, gold and somehow they were satisfied and we kept going.

After three or four days, the pilot of our boat kept saying: “Sorry people, I’m getting lost, I don’t know where we are going, where we are heading.” …And I remember I was so thirsty, and somehow, some people mixed up the gasoline tank with the water tank so we don’t even have clean water. I had to drink water with gasoline together. It’s a horrible taste that I still remember until now. And myself I became hallucinating, somehow I kept passing in and out. So, we kept floating…the pilot didn’t know where we were going…we ran out of gas, we are just floating in the ocean.

At night, we saw many big container ships, you know, driving by. We kept yelling and shouting and nobody stops and then one day we were so lucky, we saw the USS Shasta. They just came right to us, they started pulling down the ladder, and every one of us started climbing up. And that’s my happiest…moment…that I can remember. I got on the boat and everyone was safe. Yeah…now every time I look at a can of Coke I remember…And I remember that I had never seen a can of Coke… that made me really happy as at that time.

And, so we got picked up by the U.S., we went to Singapore, stayed there for four months, and then we got transferred to another refugee camp in Indonesia. There, we got a chance to learn about how to prepare our lives to come to the U.S. And after 8.5 months, we were ready and we got the airline tickets and everything. The first place we landed, we lived in the Bay Area, and that’s where I start my life in the U.S.

Andrew: So, how would you say this whole journey has shaped who you are as a person now?

Mr. Bui: We lost everything; we start from empty hands. I remember, I started working at my first job at the Straw Hat Pizza at 3 dollars and 10 cents. That’s my first hourly rate. And then from there it starts moving up: College life was good, we had fun. I graduated, I got many offers. I am happy overall, I think it’s a long journey, but it’s good. Thinking about it, I think my dad, he made a really gambling decision, but I think he should have credit for that. So as far as success here, I think I have achieved what we planned for my life. We usually say the “American Dream.” I think we are doing pretty well right now. We have our house; we have the kids going to college. So, I think it’s worth it…it’s really worth it.

Kevin Bui was born in Saigon, Vietnam during the Vietnam war. At the age of 15 in 1981, his family decided to leave everything behind and escape the country as boat people. The journey by boat was extremely difficult, with cramped quarters, dirty water, and lack of food. After the arduous journey by boat, Kevin's family stayed in refugee camps in Singapore and Indonesia. After over a year in the camps, his family received airplane tickets and were able to come to the United States, where the Bay Area became their new home. He worked very hard to build a new life in America, obtaining a college education and raising a family. Today, Kevin is a software engineer at eBay Inc. in San Jose, California.