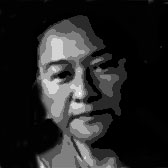 Maunupau: “My name is Manupau relationship is I am his (Igarta Benito Jr) oldest daughter”

Pam: “My name is Pam Keola and my relationship is that I am fathers youngest daughter”

Maunupau: “My Dad was a Marine Gunnery Sergeant. He was in the marines for about 22 years something like that before he went on his last tour. He’s from Maui in a very small area in Maui, it’s called Happy Valley and back then they expected all the young men to go into military because that’s how they could support their families and he did the same thing, his oldest brother did the same thing, they were all in the military, but my dad was the marine that was in the helicopters. So his helicopter exploded but my other uncles they were never in any type of combat so they kind of lucked out in the easy way of the military.”

Pam: “I was three years old when my father was killed and I actually asked my sister to join me because I don’t have any memories of my father when he was alive, when he was at war. I was telling Manu the other week when we were discussing this interview that I don’t even remember a funeral”

Maunupau: “My last memory of my Dad was we had to take him to Long Beach, California, because he got on the carrier that was taking them closer to where Vietnam was and before he could start the war. I remember that especially and it was traumatic because I knew it was sad, but I didn’t thank it was going to be the last time I saw my dad. My Dad died on March 21st 1966.”

Maunupau: “When my Dad passed he was in Danang which supposed to be one of the bigger parts of Vietnam and that’s where his helicopter crashed”

Pam: “I years ago was just trying to do some research on my father because I don’t have any memories so I was just trying to on my own figure out something about him and that’s how I came upon the story of Operation Texas, that tells the story of when their helicopter got shot down. All I know from that is they went on a mission to help bring out the wounded and when they went their helicopter got shot down and everyone in the helicopter that my father was in- everyone died there were no survivors of the crash. There was one survivor, the head-person of the helicopter was able to be rescued and taken to a hospital but later died. So they all perished from that trip. That’s all I know about it, Operation Texas”

Maunupau: “When he perished he was only a month away from coming so that was kind of hard because we were expecting him to come home but that he didn’t. He had one month left on his tour and we just knew he supposedly came home in a casket, uh, we don’t know really it was closed and sealed and could not be opened, but I remember that day.”

Maunupau: “My uncle came to pick me up in school. I was in the 5th grade at school and he came to my classroom and he goes ‘come on you gotta go home’ and I’m like no I got a test, I got this, I got that and he goes ‘no you gotta go home your mom wants- wanted me to pick you up’ and I had no idea why and I’m like okay so I got in the car, but the minute we turned in the driveway I knew because the black limousines was in our yard. That’s always like a bad sign because you know when you see people opening the door to a military guy you know it’s bad news, well the chaplin and his captain were there that day. So when I walked in the house Mom was already hysterical and then I was kind of putting things together and then I knew what happened but I couldn’t believe it because we had just talked to him a couple nights before.”

Maunupau: “My Mom has always been a very independent person but she just couldn’t think she couldn’t do anything and she was worried about being left with three children and how she was going to support them without a Dad.”

Pam: “I’d very often growing up- even as an adult have thought what would have been different, what would my life be like if my father never died. And I think that- we just talked about it, Maunu and I just talked about it. Okay, sorry, we just talked about it because I actually had a pretty rough life with my Mom. We were never close up until the day she died. I look just like my father, I look exactly like my father compared to my sisters who look more like my mother and I think that my mom was very angry as Maunu had shared, she was very upset, very angry at what life had dealt her because my father was killed. Even though I think she didn’t- it wasn’t in his control but she was still angry and she had to take it out on someone and I think a lot of times when she looked at me growing up she sees my Dad and she would get angry because he left her with three kids and so she took it out on me and so that often made me wonder what could’ve been different- how would my life have been different to have known my father or to have him there so that maybe I wasn’t treated the way I was treated because of the anger she carried with her until she died. The anger about him leaving her and him being killed and no matter whose fault it was or how it happened that was the end result and so she just had to deal with it in her own way and I don’t fault her for it. I understand what she went through was hell which is my decision why I would never marry a military man because I wouldn’t want to deal with that myself. I’ve thought about that countless times about how my life would’ve been different.”

Maunupau: “There’s a lot of why- why? Why you guys gotta do this anyways? I understand being a marine and doing what you’re assigned to do, but why is that something they have to do? Back then of course I didn’t know anything about it, but all I wanted to know was why, why, that wasn’t fair to us and then as I saw my Mom like collapse all the time and it’s like it wasn’t fair to her but you know it’s not fair to anybody, war, and I have friends that came back from Iraq or Afghanistan, young people, and they’re all messed up with PTSD already and they’re only in their 20’s with little kids, that’s not fair for that to happen to families, it breaks up a lot of people, it didn’t break us up but it does break up a lot of people.”

Pam: “I would think, and it’s not really not in our control, you know it up to our government who decides that we’re going to send these other innocent people out there to fight our battles while they sit in a beautiful white capital up there. But I think really it’s- we don’t need war, people will just in different countries, different religions, whatever differences we have. There are better ways to come to peace and come to agreement, and to even to just agree to disagree. War is just unnecessary in my mind because the toll it takes on the people that are involved, it’s not worth it for anybody. Not for the countries, not for the families, not for the soldiers, there has to be a better way to work things out and you got to pull back on the aloha, say aloha and you know talk about it and come to some kind of peaceful agreement so that there is no war. That would be a dream to have no more war in the world.”

This entry was posted in Civilian, Profile. Bookmark the permalink.

Maunupau was born in America at the start of the war in 1955. Her younger sister Pam Keola was born in America in 1963. Their father GySgt Benito Igarta Jr, born in 1931, had enlisted after his brothers in 1952 and had brought his family to live alongside the El Toro military base where he was stationed. After he was deployed to Vietnam, their family moved back to Hawaii to be closer to their relatives. Benito Iguarta Jr. carried out his duties as a pilot but died in 1966 during Operation Texas when his helicopter was shot down by Viet Cong forces in Danang. For the next couple of years, Maunupau and Pam were helped along by the community of friends and family members living around Hawaii. They watched their responsibilities shift as their family moved multiple times, jumping around school districts, to try to recover financially and emotionally after the loss of their father. The U.S. military awarded them with scholarships that allowed them to attend college, and both did so into their mid-20s. They both have strong feelings toward war and still live together in Hawaii with the rest of their family where Pam Teaches grade school.