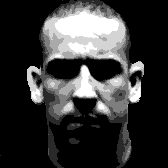 Gunnery Sergeant John Trodden was deployed in 2005-2006 with the 1st Battalion, 4th Marines to Fallujah, Iraq. Here Trodden discusses his history with the Marine Corps and his motivations for enlisting, his experience during deployment, and the ways he was affected by it upon his return to California.

Service Record
I enlisted in the Marine Corps in 1996 right out of high school; graduated boot camp in February 1997. I went to a Marine combat training school; then I went to Camp Charleston, North Carolina for a personnel administration school. Did that for about 3 ½ years, then I went over to the 1st Light Armor Reconnaissance Battalion, was promoted to Corporal Sergeant when I was there. Then I went over to 1st Battalion 4th Marines from 2000 to 2002. I was then sent to recruiting duty in San Francisco for a period of three years. After that, I came back, went to 1st Reconnaissance Battalion in Camp Pendleton, deployed in 2005-2006 to Camp Fallujah, Iraq. Upon return, I was commissioned in the Marine Enlisted Commissioning Program, which I’ve been doing since 2007.

Motivations for Enlisting
What made me enlist was the discipline and the structure that I had always lacked growing up. Watching movies, hearing stories from other veterans – my coach was a former Marine and he talked about the unity and the brotherhood, and coming up in a broken home I just knew that I had never experienced being in an environment who I could trust besides my mother and my sister. I joined the Marine Corps not only because of the discipline and the structure, but also because the stigma of being a United States Marine was always something that just stuck out to me. Being a sailor, a soldier, an airman, just didn’t have the same ring as United States Marine.

Mission in Iraq
When we initially got [to Iraq], we were assigned to the Al Anbar province. The city of Fallujah had boiled over and was still a hot zone. That’s actually where we got ambushed when I earned my combat action ribbon. But when we initially got there, we patrolled the Al Anbar province, set up vehicle checkpoints. We worked together with a group called the Surveillance, Intelligence and Reconnaissance Group. Can’t really talk too much about how we went about gathering intelligence, but we gathered intelligence on certain positions of enemy insurgence, certain factories where IDs were being made, and training camps in which – we used to call them the MAMs, a codename for insurgents between the ages of 18 and 25 who were dedicating their lives to the cause of the mujahedin to fight the American forces. We arrested, in our first seven months, close to about 100 insurgents. After that our mission changed and we went into more of patrolling vehicle checkpoints all throughout the city of Fallujah and the Al-Anbar province.

Surprising aspects of deployment
I had been training to be in a tough situation with limited resources, away from my family, but there’s no training that would prepare you to actually be in 115-degree weather with full gear and knowing that the buddy to the left or right of you was willing to share his food, his water, his blanket with you. To actually be in that environment where mistakes can cause lives to cease, it’s a different pressure, it’s a different burden. But with the camaraderie that my unit had, it helped us get through knowing that when I wanted to feel sorry for myself or feel bad about missing home, I looked to the guy left of me and I knew that if I burdened him with my bad attitude it would put more pressure on him. So it became a system where we just fed off each other. So I would say the reliability in being in one of the toughest situations humanly possible but depending on another human being as much as he was willing to depend on me helped me get through that period of time.

Long-distance relationships and marriages during deployment
I was married [during my deployment] – she’s my ex-wife now, so as you can see it wasn’t very consistent with having a solid family life. It was more so my fault, it wasn’t the Marine Corps or the deployment at all, it was just – got married at 21 years old, and with the commitment to the Marine Corps, whether it was through my training to go to Iraq, recruiting duty, and even the execution of going to Iraq – it put a real burden on myself and her. We had a young son, and it kind of fell apart while I was over there. If I hadn’t been in a leadership position where I had young men who were looking to me to inspire, and to feed off me, and for me to feed off them, it would have been a lot harder to take. I had a couple buddies who actually got those Dear John letters that we all hear about in movies and stories and they didn’t take it very well. A couple of them actually had to come home for personal reasons. But I worked through it, came back, got divorced, everything worked out, and now I’m happily married. So it was a blessing in disguise – I hate to say it that way, but it was a blessing in disguise.

Distinguishing civilians from enemy fighters
By that point in late 2005, the civilians over there basically knew the rules and regulations: not to approach us, keep their hands out of their pockets, get out of the road when we were crossing. So to be honest with you, we never really had any surprise Buy allopurinol online attacks. The only thing I can say is that we did have a situation where at the time, we were working with interpreters whose backgrounds weren’t as solid as you’d like them to be. One of them, we weren’t sure what team he was playing for, but we ended up figuring him out and got rid of him. But as far as distinguishing the enemy from everyone else, the enemy was shooting at us and everyone else wasn’t.

Returning home: Bought a gun
I told myself when I got back that I’d be able to go back to normal. At this point I had dealt with Marines with PTSD; I had heard all the stigmas, the effects – just being afraid all the time, and not being able to go out without the worry that somebody’s going to jump out and have explosives strapped to his chest. But I would say the three biggest things were: one, I got a gun. I thought about it initially, I was going to get one prior to deployment, but I probably procrastinated. But when I got back, it was a sense that you just never know. What triggered that was, we were over there, giving them food, water, building schools for them, trying to get them free elections, trying to get them a government in place, and just to know that you try to do some positive – yeah, obviously being there caused a lot of mixed emotions with some of the mujahedin who were there – but that whole fear factor that at any time, something can happen. So I purchased the gun.

Returning home: being in a vehicle and keeping friends close
Second off was driving, you know, because for a period of nine months, anytime a vehicle got close, anytime a loud noise on the road, anytime a pack fire or something to that extent – it was a little startling. It was pretty humbling as I sat there in a car, I wouldn’t say in a fearful state but just more of a concern. I was driving down a dirt road [in Iraq] with boxes on the side of the road, IEDs went off several times; one of my good friends actually got his eardrum blown out because an IED disabled his vehicle and he got ambushed; luckily no one got killed. But the bottom line is, 1) got a gun, 2) the fear of being in a vehicle, and, 3) jumping back into forming new relationships: I’ve always been an outgoing, pretty funny guy, but for about two or three guys I just stuck with the people I knew that I trusted and had been there, and I kept that inner circle real tight, which is not really like me. So if I could narrow it down to three things, it would be those things.

This entry was posted in Iraq, Post-Traumatic Stress Disorder, US Marines and tagged Fallujah, John Trodden. Bookmark the permalink.

John Trodden was born in the San Francisco Bay Area and enlisted in the United States Marine Corps in 1996. After graduating from boot camp, a Marine combat training school, and a personnel administration school, Trodden served in the 1st Light Armor Reconnaissance Battalion, the 1st Battalion 4th Marines, and the 1st Reconnaissance Battalion, the last of which was deployed in 2005-2006 to Fallujah, Iraq. Trodden was awarded a Combat Action Ribbon for his actions during an ambush of his squad while deployed in Fallujah. Since his return from Iraq, Trodden has been working in the Marine Enlisted Commissioning Program and the Reserve Officer Training Corps at USC, where he is also majoring in communications.

Chris Rollins was born and raised in the San Francisco Bay Area. He is currently in his fifth year at USC finishing up a Bachelor's in earth sciences and a minor in physics. He will be enrolling in the Geophysics Ph.D. program at Caltech in fall 2011.

Chris Adamski was raised in Texas and enlisted in the Marine Corps at 18 years of age. He completed 4 years serving with 1st Battalion, 3rd Marines based in Kaneohe Bay, HI. During his tenure with 1/3 he deployed twice to Iraq in service to Operation Iraqi Freedom. In 2009 he was accepted into the Marine Enlisted Commissioning Education Program (MECEP) at the University of Southern California. He is currently a Junior there and is majoring in International Business. Upon graduation, Chris will return to the Marine Corps to serve as a commissioned officer.

Jacob Loya is originally from Diamond Bar, CA until he joined the Marine Corps in August 2004. As a Marine Jacob was a Signals Intelligence Analyst stationed in Kunia, Hawaii until he was accepted in the Marine Enlisted Commissioning Education Program. He will earn his degree in Political Science and return to the fleet Marine Corps as a commissioned Officer.