We Did What We Had To 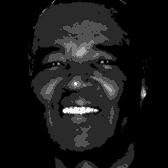 My name is Eugene Windom, born in Oxnard, California.  It’s kind of a farm town and it’s kind of like the Grapes of Wrath.  People came from all around the United States to look – especially the Midwest – to come over and find work in California.

There were six brothers and sisters – I’m the oldest.  We pretty much lived a decent life because everyone worked, but when we first got to California – actually I was born here in California – but when Buy paxil online the family first got here everyone lived in the same house.

When I graduated from high school I decided to go into the Air Force, and the reason why is because there was a draft at the time and if you got drafted you usually ended up going into the Army… or the Marines… or something like that.  I really didn’t want to be a ground-pounder or a leatherneck and all that kind of stuff, so I decided to go and take a test.  Well, the higher your score was on the test the better position you got or the… I should say you got to go into the more glamorous forces.

Then I transferred to Cal State Northridge to finish up on my degree in Biology, and there was another bulletin board that said “USC School of Dentistry chalk carving test” – they were looking for candidates for dental school.

They gave us a rectangular piece of chalk, x-acto knife and a piece of sand paper.  They said: “we want you to make a hemisphere on one end and a cone on the other.”  So I did my little thing – of course remember I had wood-shop and crafts and all that stuff – so “chew chew chew chew chew” did it all up, got the sand paper sanded it all up, and then they said “Wow, this guy is hot! Look at this… look what he did, this is like perfect!”  So everyone was doing choppy work and looked crappy, choppy ‘unfinessed’ and all this kind of stuff, and the guys were asking me – he said “well, what did you do?” and I said – well if you take a hemisphere and a cone and you put them together…and you finesse them… you get a perfect teardrop, a flawless perfect teardrop, and that’s what it was.  They said “Ooo you’re a bad dude, we need you in dental school.”

Reflections on His Tour of Duty

But no, over there the thing is you’re always thinking about coming home, but the thing is they send young men to war because…they don’t think of the consequences…they don’t think about fear…they don’t think that they are going to be the ones to get killed because pretty much…we’re invincible.  If you’re nineteen years old you’re not thinking – bullets are flying over my head – I never thought one was going to hit me.  I could hear them going by “shew shew shew” but I had special forces guys guarding me while I was loading and unloading the airplanes, and I could hear the bullets going over my head or by my head or whatever and I just… for some reason never thought that I’d get killed.

But we’re supporting those guys that are fighting.  There are so many of us in the background and its a typical day for the ones… like my typical day was… get up in the morning – the military always has things for you to do to keep you regimented.  Make sure that you know that somebody is there that can tell you what to do or give you orders that you have to follow on… keep you brainwashed so-to-speak – you get up in the morning and its okay… look on a roster and its your turn to rake the sand, or do KP or peel the potatoes, or your turn to whatever, we always had chores, we always had regimentation.

And whenever I saw bodies that got sent home, I actually wanted to go out and kill a gook.  Because I know a gook killed that person.

We talked before and you can get court martialed for getting sun burned–you belong to the U.S government and whatever the U.S government wants you to do that’s what you have to do.  As far as being black and saying they never called me nigger this and that; that has nothing to do with it.  It has to do with being in the United States, being part of the United States military machine and taking care of that.  Matter of fact I think everybody should serve two years in the military just like they do over in Israel because I think everybody needs to have that… be able to later on in life be able to say – you know what “I served my country, I did my part, I pulled my little two years” – and I feel that nobody could ever say that I don’t deserve whatever it is here… I don’t deserve my retirement, I don’t deserve any kind of medical treatment, I don’t deserve my house.  Nobody can tell me that just because I didn’t serve my country that I – you know – don’t deserve something.  So I think everyone should pay their dues and spend a year or two in some sort of service, and I think the President was talking about something like that.

One time I was flying a plane – and this was the closest I got to I guess getting killed – is that one of the small arms fire – which means just a regular bullet – when into the gas tank and you could see this little stream of gas coming out, looked like somebody was peeing right out of the gas… like a little stream of gas coming out.  And I’m nineteen, twenty years old and it didn’t really phase me at the time but later on you think about it. That could of caught on fire… or you could of run out of fuel and crashed.  Didn’t even think about it cause I figured there’s another tank on the other side you fly off one gas tank.  You didn’t need…something I didn’t think about…bursting into flame or catching a spark of whatever.

I’m looking at some of the pictures here and… I’m looking at a picture here, we have a girl who is… cleaning… helping us clean the barracks while we out working during the day, good-looking girl!  I didn’t have anything to do with her.

A bunch of us boys here at the USO, we have a girl that came from the United States to come over and actually entertain us and help us play games and shoot pool and provide refreshments – things like that. They were over there -you know- kind of like doing their own services that way. We had girls at home doing the same thing; they had USOs all over the place.  They’d dance with you…do all kinds of stuff.

I use to hang out with the Vietnamese, they liked me.  Here’s a group of Vietnamese right here and um…”Chop Chop” on the back “Chop Chop” means to eat food. “Chop Chop, Chop Chop, Yum Yum, Chop Chop.”  So they’re getting ready to eat and asked me to join them but I don’t like what they had because they eat dog and stuff like that.  I can’t hang.

Whenever Pan American Airlines use to come in bring these pretty airline hostesses.  There I am on the runway here with one of the runway hostesses hugged all up with her with my M16 and everything on out on the flight line.  So I’m having a good time, matter of fact I got some hugs and kisses and stuff, she got back on the plane never saw her again.  This was the only girl in the whole base that had round eyes!  We called her round eyes.

Most people hear about Vietnam as being so terrible and you hear all the guts and all the blood and all the rapes and all the – you know – people cutting penises off and sticking them in their mouths and cutting their ears off and putting them into boxes.  And my reason for doing this interview is so people will see that the average person that went to Vietnam didn’t comeback with shell-shock and have all these bad thoughts.  I had a good time in Vietnam actually, even though I’m counting my days to coming home because I don’t want to be away from home – just like anybody else – I’m counting those days… I want to get back home.  But while I’m there, make the best out of it, get as much entertainment as you can, make as much money as you can – you know – send money back home so mama can buy a hog and butcher can put it in the freezer that you just bought her and then drive off in the old Pontiac that you just bought her before you went to Vietnam.  I was sending money home. All that black market money I was sending a lot of that home so… I did have enough left to get me up back in rhythm though.

This entry was posted in American, US Air Force and tagged Eugene Windom. Bookmark the permalink.

One Response to Eugene Windom

Born in raised in Oxnard, California, Dr. Eugene Windom is the oldest of 6 children. His father, a shoe shiner and construction worker provided a modest lifestyle for the family, while his mother, a homemaker performed domestic work for other families on occasion. “We had everything we needed,” Eugene says as he describes his upbringing. At 17 yrs old, Eugene graduated high school and joined the United States Air Force after hearing news of an upcoming draft. Scoring in the 95th percentile of the qualifying test, he was placed in the Air Force, the highest ranked service. Despite aspirations to be a dental laboratory technician, Eugene was sent to Florida to work as a warehouseman. In 1966, at the age of 19, he received orders to go to Vietnam. Eugene served one year in the Air Force, collecting bodies of American soldiers during the war in Vietnam. “We did what we had to do,” Eugene says almost nonchalantly. Despite his dismal task, he made the best of his time in Vietnam, and has many fond memories. Upon his return, Eugene enrolled in Ventura Jr. College, studied biology, transferred to Cal State Northridge, and eventually attended USC Dental School. He graduated in 1978 and returned to his hometown to practice. Today Dr. Windom is a proud father of 2 children ages 24 and 21, and is developing his own line of dental hygiene products.

Nicola is a senior graduating from the School of Cinematic Arts. With what little free time he has he likes to pursue photography, films, Crossfit, violin, volleyball, among other activities.

Mark is a senior graduating with a B.S. from the Thornton School of Music with a major in Music Industry. With his time outside of school, Mark is a professional pianist and recording engineer in the L.A. and Orange County area.

Andrew Franklin is a senior graduating this year with a degree in East Asian Area Studies. In his free time he enjoys basketball, snowboarding and exploring the world.

Simone is a junior in the Thornton School of Music, majoring in Music Industry. In her free time she enjoys writing and recording music, as well as dancing and vintage shopping.