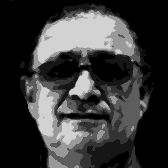 CG:  I volunteered to go there. Why? Because of the way I was raised.  All of my football, baseball coaches were World War II and Korean War Veterans and it was kind of instilled in me that one day, you would, you know, join the military. And at that time, it was not about Vietnam, it was about us and Russia.  Communists trying to overturn the U.S. all of that, you know.  And so, I decided on going to the air force so I could go to Europe. I wanted to see the Berlin Wall, I wanted to be on the first string. I wanted to go to Germany or I wanted to go to Italy.  Germany had the wall, and I knew that was kind of a hot spot, and also if it weren’t there, I wanted to go to Italy because my mother, being a Roman Catholic, would say wow, my son went to see the Vatican, things like that. And then, I had had 4 years in parochial school that taught us basically that one day we were going to have to stand up to the Communists.

There was a third world colony, and that was the downfall of the Russian empire because the Russian were giving so much of their weapons to the Vietnamese.  AK 47s, all that, missiles and everything else. Then they got themselves into Afghanistan.  They did the same thing there and all the Russians were doing was send out AKs everywhere across the world and finally they went bankrupt because they were a military society sending out a lot and receiving nothing because no one was paying these guys back.  So Vietnam, as I see it, is one of stepping-stones that was the downfall of the Russian empire.  That’s how I look at it.

There are so many Vietnam Veterans, for whatever reason they got to sit on the sidelines…they talk about “Hey I wish I was there,” and I say no.  I had the poise enough and respect enough for this country to do what I was ordered.

I was taking off one o’clock in the morning and Kenny was walking out with me and we were walking to the terminal, getting ready to get on the 707, and he leaned over to me and said, ‘you know, if you don’t want to go, I know people in the underground, and you don’t have to go, because nobody’s even going to know that you’re not on that plane.’ Because they weren’t going to take a headcount of all these guys because all the different military services were being packed into the 707.  The army, air force, everybody. And there was nobody really taking a role call to see how many people were there.  So for a second I thought to myself ‘just get out,’ you know, because by then, I was pretty scared. Because I knew what I was getting off to, and after the stories this guy told me, I wasn’t exactly excited about going and I wanted to bail out. But I thought about my mom, I thought about my peers, and how I would face them.  And then I knew if I went to Canada or anything like that, it was ‘aw crap,’ you know, you’re screwed.  You got to do this.  It’s just like diving off a high dive, you’re already there, everyone’s behind you, what are you going to do?  Are you going to jump, or are you going to walk back, you know?  So this was kind of a high dive.  I told myself, ‘just suck it in, bite your lip, and go through with it.’

I saw the air force military policemen who were guarding the 707 that flew us in and I was looking at them and I could see that what they were wearing and I was like, ‘Oh shit, this is what I’m going to be doing.’  And they were wearing flack jackets; they imitrex looked like some guys right out of the jungle.  There were sidearms, grenades, this and that, flack jackets, all this other stuff, jeeps – the way they were mounted – it was an eye opener.

It wasn’t just one or two events; it was the entire 364 days. I participated in a couple of raids where we went into the villages at two or three o’clock in the morning with the South Vietnamese army. It was just complete chaos, unbelievable chaos.  Where human beings were just not treated as human beings.  There was no ‘knock, knock, knock, Mrs. Jones may I come in?’  We had troopers going in just dragging people out, abusing people, you know. I was on a particular raid with a bunch of South Vietnamese guys and I was the only American and my particular job was to find out how many weapons they picked up, this and that, out of the raid and if they were Viet Cong.  The only way we suspected Viet Cong was if you didn’t have your national ID card, we were going to suspect that you were V.C. [They’d say] ‘We no V.C. We no V.C.’ and we’d be like, ‘Yea right, as soon as you finished this drink if you could shoot us in the back you’d damn-ass, do it.’

The South Vietnamese army did everything in order to kind of counter-work everything we were trying to do.  In some instances – well, in many instances – we didn’t trust them.  We trusted some of the elite troops, but not the regular army, or what we called the ARVN.  If they were participants in the raids in the villages, they were very, very unkind to people. And brutal. And I could see why the Vietnamese would hate us because we were the guys who backed them up.  We were the guys who taught the Vietnamese how to fight the Japanese, we were the guys who supported the French, and we realized that that was a mistake but we were in there because we helped liberate France during the World War II.

I graduated in ’64 and it was Surfing USA and all of that stuff, you know. We used to go surfing in Hermosa Beach, and Trussles, and stuff like that. And then going to a place like that, you know, and there were no time outs.  You couldn’t say, ‘Hey mommy, I want to come home.  Hey look it’s too hot.’  You’d pull guard for 15 to 16 hours, and sometimes you weren’t allowed to heat your rations, so we learned to put our rations underneath the jeep. If you were a convoy, you put it underneath the hood of the vehicle and heat it that way, or else sometime, you just pop open a can.  If you have ever opened up a can of ash, open it up, and just eat it straight out of the can, then you will understand. When I was there, we were eating World War II rations.  We lived off cigarettes and coffee, cigarettes and coffee, cigarettes and coffee.  You just need to rough it and tough it and shut the hell up and just move on.  One day, everyday. And you did learn to live by a calendar. You make it through a day, you know, and the biggest event of my day was, I honestly felt, I could, in my short term calendar, was to chalk it off.  In 364 days, the last day, you’re out of there. Get on that plane – we referred to it as a freedom bird. It was like my celebration to be born again, you know, when we got on that airplane that last night we were there.

The military was really a part: I refer to it as my first life, and now I’m in my second life.  But it did cause havoc and I didn’t understand a lot of the effects it would have later on in my life.  I wanted to be a sheriff, but I changed my mind because I didn’t want to wear a target on my body, because they were having demonstrations and all that.  All I wanted to do was just come home and just forget about all that crap and just move on.  We were like ostriches; we put our head in the sand and just moved on.  That’s just what we wanted to do.  It was a great majority that did that.  I know guys who have worked for Arco, Boeing, and wherever that were just ostriches.  We got married too soon.  I went through three failed marriages, and that’s where it really affected me.  I know some guys who have been married two to three times. It was not uncommon. Some guys fell into drugs, some fell into alcoholism, and a lot of us were very successful drunks.  We were.  We had very prominent positions, but we drank way too much.  Partied too much.  And the cost was excessive marriages. But also a lot of us got promoted to prominent positions too.

My youngest son is 24, my oldest son is 38 and they are just beginning to know some of the things that I decided to talk to you about. From pictures and this and that. And they’re like, ‘wow! Dad! Damn!’ I had to help unload body bags on Thanksgiving morning off a helicopter. What do you think I think about?  Those are the things that, they don’t leave you.  My mother and I corresponded quite a bit. I actually congratulate my mom and I told her, ‘You know if it wasn’t for you, I wouldn’t have made it through.  You gave me a strong will, you gave me a strong mind, you gave me a strong basic education, and those are the things that got me through all this.’  When my mother passed away about two years ago, she left me all the letters that I’d written her.  She had saved them.  She had saved them chronologically.  And so as I was emptying out her duplex, she had told me that they were there, and I never wanted to bother with it. I sat down and I started reading them.

We got beat up sometimes, but we didn’t lose.  That’s what people don’t understand.  People did not, we did not walk away as, ‘Hey they kicked us out of here, like they did the French.’  We knew we were playing with death and we cheated death so much and that’s how I look at my life.  No matter how many troubles or whatever goes on in my life, I always reflect, when times get hard, I always reflect to those times and say hey look, it’s not that bad.

Conrad enlisted in the Air Force security police and served in Vietnam from 1967-1968. He served in the towns of Cam Ranh Bay and Dong Ha. He is very proud of his service and dedication to our country, but admits to the long-term effects his time in the military has had on his life. He is an avid reader and has read extensively about the war and understands many of the complexities of the struggle and the geopolitical context in which it took place. He speaks with us openly and at length, with straight language and honest insights.