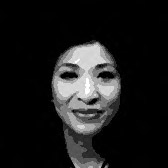 I was postwar when I was born in 1975, and I was there until I was five years old when we smuggled out. My father’s family… They had a lot of money, and so they sent.. Let me backtrack. My father has quite a bit of step-siblings. So their family, they were well-to-do, and they spent the money. It was expensive to leave the country. They spent a lot of money on three children to go to the U.S or out of the country for something better, hopefully, to sponsor them. 2 of them died but didn’t make it. One of them made it, but he got into drugs and gangs, so they needed someone else, and so they were gonna send one of my step-uncles, no my half-uncle. But the fortune-teller said not to and said they would have the same results as the other two. The only one who will make it is my dad. So they decided to send my father, and at the time, my parents just had my little brother, who was a month old. My mom said the whole family or no one. She doesn’t want to be left behind or be apart from her husband. So they had to put out the money for the entire family of 5.

What was the process of coming to America like?

As the story was told, I was 5. We were on the bus, and my older sister was 6, and she was announcing on the bus that we were going to America. My parents had to play it off because when the communists catch onto that, they’ll jail you for it. I vaguely remember the trip. I even remember my sister. She was on the bus, and all of a sudden, she opened her mouth, and a tapeworm came out of her mouth, and it was pretty big, and my dad pulled it out of her mouth. I remember that. I remember that long ride on the bumpy dirt road, and then that was pretty much. I don’t remember so much from that, smuggling from the bus to the boat.

But I do remember a bit from the boat ride. I remember a lady screaming and yelling and she was crying. Turns out she left her baby on a cloth hammock close to the engine that twirls and that baby fell in there.

How do you think your parents’ experiences and your early childhood experiences have shaped the rest of your childhood growing up and your family structure as a whole?

I think it..it’s hard for our family to survive because some people have not, overcame fear. I also, from my mom she said that she was arrested back in Vietnam they thought she was a communist. I could not even begin to imagine what happened to her in prison. It was hard for her because she was studying to be a pharmacist and she never got to be one. I do feel that I felt some of the consequences of my parents especially my mother going through that and without having therapy or just someone to talk to and I think she put it out on me. she has never left her country in her mind but she still maintains the mentality of the obedience despite if your  parents are wrong you put up with it whatever they do, you take it. I battled with that with my mom because I like to be free. I don’t like to be confined, restricted. but growing up with her teaching I retain part of it so it was a yin and yang battle for me I try to respect it but I try to suppress myself to To be obedient. But it didn’t last long and there’s this other things because of my mom’s I believe PTSD and everything else that goes along with it she put out a lot of things on me I felt like I was her punching bag.

Are your parents still alive today?

They are, both parents are alive. Unfortunately, my mother had a stroke about almost four years ago. They performed some brain surgery,and It went wrong so she doesn’t have short or long term memory. She’s there but she does come in for about a minute or so and she’s gone.

Do your parents still talk about the war? Do they still feel passionate about their stance?

No, they don’t. I think it’s more that they wanted it behind them. They’re this old, struggling through surviving in a new country so that’s the last thing on their mind.I believe they’re grateful that it is behind them.

I understand more about mental illness, and how it affects people and their lives and how much it affected my mom and I wish that she could have gotten help, someone to talk to. I believe it destroyed my mother. Some people are strong enough to keep it in, dont wanna talk about it, cancel it out, zone it out, i think my mother tried to do that but it slowly ate her up alive. My father has been through 2 wars so  i think he’s grateful to have it behind him and move forward. I’m grateful, but i am sad that there was a price to pay and it was my mother.

Have you been back to Vietnam since you settled in Claremont,California?

No,I haven’t but my parents and older sister have but I haven’t.

Do you think this is something you would like to experience?

I do, before maybe a couple years ago no. This is my country, and I don’t really have any fond memories. I do have families there, but I do not know how to contact them. But my perspective now is a little different and I’d like to. I’d like to visit a country that I was born in, the town I was born in and raised. It’s more exploring and enjoying traveling. When I was there, I’m not fully aware of the country despite the politics .. but It’s still a very beautiful country, especially where I grew up and I’d like to visit it.

Damage is done. And on top of that I’m in no position to change history or take revenge. Things happen and evolve through life which is. I have to learn how to handle it and stay strong and survive through it and make the best of what we have.

Cindy Long was born on January 26, 1975 and grew up in Vinh Long,Vietnam. Growing up under Viet, Chinese, and French influences she was able to grow up under a diverse background. Under a wealthy family that was largely involved in constructing the community they lived in, she struggled in her transition. As her parents fled from China to Vietnam for a better life, they were met with the struggles that came with the Vietnam War. Regardless, Long grew up to recognize the ethnic differences between her Chinese and Vietnamese influences. Long now resides in Claremont, California and now works as a realtor.