US Navy in the Pacific Rim 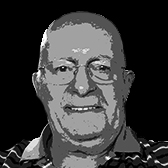 My name is Charles Canfield. I am 77 years old, a retired U.S. Aviation Navy person. I spent 20 years in the Navy and a lot of it was during the Vietnam War.

How did you join the military?

I joined the – I didn’t volunteer for the war. I volunteered to join the military. When I joined, there was no war, so I was a peacetime “joinee”. I was out of high school, I was – started to go to college – Sac State. A couple of buddies of mine were bumming around and doing nothing – that I had graduated with.

I was doing fine, except – I was real excited about going to school. I wanted to be a forest ranger when I was growing up, but I wanted to go to Humboldt State, in Northern California. My parents weren’t real enthusiastic about me doing that, so I didn’t do that. So I signed up for Sac State and went there for a while, took some classes.

My two buddies came by one day and said, “Hey we’re going to go down and join the Air Force. Why don’t you come down with us?” So I said ok, I’m not doing anything else – wasting my time going to school right now. Went down, and the Air Force guy says, “Yea we’ll take you in about a month.” Nah well, we want to go right away. So we went next door to the Navy, “We’ll take you Friday.” So we said, “Where do we sign?”

Tell us about your military background

I was not ever directly involved with the Vietnam War in countries, so to speak. Most of my time was spent in the Pacific Theater. My main job was electronic surveillance, and we kept track of all the Russian submarines – hopefully. From all the little islands in the Pacific, like a lot of time was spent in Adak, Alaska, along the Aleutian Islands, which was a close Navy base to where the Russian submarines would travel across the Pacific over towards the United States for – where their ballistic submarines would patrol. And the U.S. Navy would do the same thing around the world. Our job was to keep track of Russian submarines, in case something ever happens and we’d be close enough to take action against them.

What was your involvement in the Vietnam War?

My little involvement with the Vietnam area, or era was when we would fly down from Japan, I was in Japan at the time for a deployment for six months. We would fly down to the Philippines Islands and out of the Philippines we would fly our patrols in the Gulf of Tonkin. And we would be flying up and down the coast of South and North Vietnam. And we would do radar surveillance and visual surveillance of everything that was kinda happening in the Gulf of Tonkin off the coast, keep track of all the ships, see if they looked subversive or whatever, warships or whatever and just put them into the command control center, that information. So that was basically my involvement in the Vietnam War.

Tell us about what you saw in the Philippines

I can tell you that what little we did get out in town to have a cold beer or whatever, it was a rude awakening for somebody who had never been out in the world very much because you would walk across the – we’d walk out the front gate and go into town which was right next to the gate.

You would see all these, I’m sure they were poor, but, kids, just little kids walking around bare feet and shorts and a little tee shirt maybe and the dirt streets and things like that.

Oh one other thing I am thinking about is when we would land in the Philippines, it was at a base called Sangley Point, it was across the Manila Bay from the town of Manila. We’d land there and we’d clean out our airplane from our box lunches and things that we had and our garbage. We’d throw them into trash cans that were alongside the runway and you’d watch these little Philippines kids, poor little kids. They’d go head first into these 50 gallon dumps looking for an apple core or whatever. Just to get something to eat or salvage something whatever it would be. That was a rude awakening for me, I had never seen that before.

So, we did the same thing one time we went for an R-n-R trip over to Hong Kong for 5 days. Same thing happened in Hong Kong. We went around to the, one day we stopped at the, what they call a floating restaurant in Hong Kong. Which is a very famous big boat that is a restaurant and you take a little kinda small ferry boat that would hold like 5 or 6 people over into the bay to get onto this boat to have your dinner. And all these little kids in the sand pans these families, and you would look down and the whole family would live on this little sand pan boat. They would have a fire there on the boat all the kids they would live, born and died there I guess.

But, a lot of the tourists there would take a coin and throw it into the water and these little kids would dive into this very murky water to try and retrieve these coins. The water was not clean water, I’m sure all their sewage and everything would just dump right into this Bay. So it was very icky to think about these little kids doing that.

Discuss your feelings about the war

At first when it first started, you know it was a war, somewhere across the country from the United States. We assumed it was the right thing to do. After the war and after I retired I think about it more and I have mixed emotions about it, whether or not we should have been there at all. I was always in the thought of if you’re in a war; you don’t go in the war to have a tie in the war. You either go in and you’re going to lose or you’re going to win. So I felt that we had the very vast, large, ability to win the war and use all your resources and go do it and get it over with. Don’t drag it out. You know same thing is happening near East too. You win if you get in a war, it’s like a boxing ring, and you don’t go into the boxing ring to lose, you go into it to win. So you give it your all, and that’s what I think you should do if you are in a war. You either get in the war or you get out of it.

Discuss your feelings about the media

Well I can’t talk a whole lot about it, other than it was very disgusting to me.  These guys over there, giving their lives and fighting like the devil over there for the country. For them to come back and get all the nasty… negative reports, it was just terrible. These guys, they should be praised… they should be thanked and here they are struggling and the media certainly didn’t help. They outta switch places with the fighting guys and go over there themselves and see what it’s like. I think they would have a whole new outlook.

Since then I know that the wars over in the near East part of the country, they’ve changed their tune. They don’t do that now, they are more proactive and more thankful and you see a lot of thanking the military now and that type of stuff. You didn’t see that after the Vietnam War. Anybody that was involved in it… I’m sure they hated the media. That’s a strong word but that’s the best word for it, they didn’t treat them well at all.

You are either for a war or for fighting or you’re not. So the protestors certainly didn’t help but you have to realize it’s their brother over there. You know, you are not doing any good for them., that’s for sure. They come back to this country and they feel like outcasts. They had a tough time and a lot of them still do… the media didn’t help at all and the protestors had something to do with it…  but I think that the media… well maybe equally with the protestors because the media would always glorify the protestors, also you didn’t see a lot of the people there ganging up for the Veterans and for the fighting guys. Maybe if they had a group of people or an organization that did as much as the protestors or the media did, it would have turned out differently. They seem to be doing that now but you know (well at least they learned their lessons I hope) hopefully they did. And it’s probably a new generation of media because this is, your talking 40 years ago? Some of them have died off and some of them have grown old. Much people form their opinions form their opinion about whatever, probably not going to change, so it goes on.

Charles Canfield was born in Sacramento, California in 1938. He grew up the youngest of four siblings and attended Sacramento State for a little while until he dropped out and joined the US Navy with some friends from high school. He served for more than 20 years as a part of the electronic surveillance team in the Pacific Rim. He met his wife during bootcamp and had two children with her. After retiring, he now lives happily with his family back in Sacramento.

Jane Li is a sophomore from San Jose, California majoring in Arts, Technology, and the Business of Innovation.

Josh Lion is a junior from Fresno, California majoring in Business Administration.

Riley Scott is a freshman from Petaluma, California majoring in International Relations.